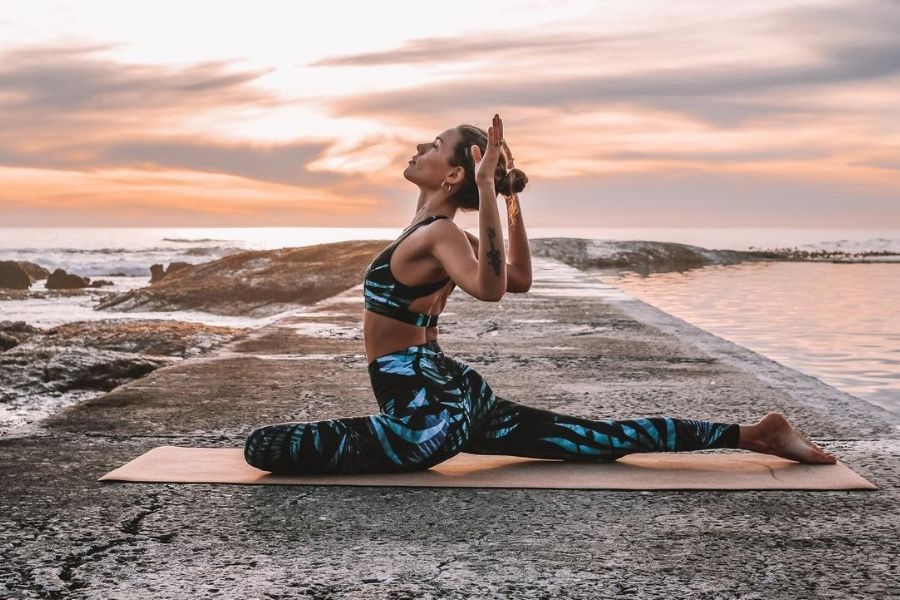 My favourite yoga styles are Vinyasa and Ashtanga.

For me, Vinyasa yoga is a deep devotion to and a dance with self, it is a moving meditation that is expressed tangibly and is generally accompanied by divinely inspired music to encourage us to delve deeper and try harder.

The power of Vinyasa yoga lies on the physical realm as well as on a very deeply emotional and spiritual one.

A well sequenced Vinyasa class synchronised with an exquisitely attuned voice (pitch, tone and intention) and wisely choreographed music, can transform a very normal state of being into a space beyond this or any dimensional plane experienced on planet earth!

It is a journey that every aspect of your being can enjoy and embark on in perfect union and balance – a journey that takes you beyond personal boundaries and limiting thoughts, a journey into infinite space, timeless wonder and devotion.

It is literally the most all-encompassing meditation I personally have experienced.

I learnt to sequence a Vinyasa flow linked together with an uplifting and stimulating well-choreographed playlist from the absolute yoga goddess; Shiva Rea.

I attended a few workshops with her in various parts of USA in 2004 and in particular the Yoga to Trance Teachers Training in New York.

She explained that the music needs to reflect the effort that is required; a series of poses that are building stamina and strength will invite a different genre compared to a series of poses involving a surrender or a “let go”.

The yoga class; postures and thus music, needs to reflect a bell shape curve, where we start the lesson slow, with postures and to music that are both grounding (depicting a relaxed heart rate) then stepping (both physical effort and beats) up a notch, as we lubricate and warm up the joints, eventually leading into a climax of sorts with a peak posture or series of postures, where we build strength and stamina, the music here depicting the increased heart rate and effort, so can be louder with a faster, stronger beat and then moving back down the curve, slowing down the postures, less effort more surrender, as we cool off the body, eventually moving back to soothing, calming, grounding postures and music … into relaxation.

Using her model I have created a Vinyasa yoga sequence to share with you. The focus is on developing core strength. I hope you enjoy it.

I love wearing our new evolution leggings and x-back yoga top with built in bra support, as it has a luxurious composition and feels like a second layer of skin, it moves when I move and does not need to be fiddled with.

They are super supportive and comfortable, allowing me to enjoy this strong moving meditation to its full extent.

Have you subscribed to my newsletter?

Sign up to the official Shakti Shanti newsletter for my insights on yoga, health and meditation and get 20% off your next purchase! Not to mention great savings on Shakti Shanti activewear.

Sign up to the official Shakti Shanti newsletter for my insights on yoga, health and meditation. Not to mention great savings on Shakti Shanti activewear.

Manage Cookie Consent
We use cookies on our website to give you the most relevant experience by remembering your preferences and repeat visits. By clicking “Accept All”, you consent to the use of ALL the cookies.
Manage options Manage services Manage vendors Read more about these purposes
Preferences
{title} {title} {title}